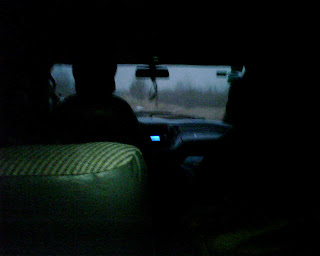 Two Mongols, a Japanese, a Chinese, a Brit, and an American set out in a minivan across China today (Mongolian border to Beijing). I held my breath as we sped across the Chinese countryside and passed through towns (our ride is an illegal service so we have to avoid highways, police), swerving around people, bicycles and dogs at 100km per hour all the while. I've had to dehumanize dogs for this trip (interesting concept).

The 2 Mongols are through 2 bottles of vodka now, and while they claim drinking speeds up the ride, the 10 pisses they've taken on the side of the road have ironically made the trip much longer.

I'm currently traveling with Paul, a 29 year-old from the U.K., and Machiko, a Japanese, sub-5 feet, 59 year-old mother of four. Paul and I are amazed at the patience Machiko has exercised over the past 24 hours; I've noticed when things get particularly nerve-racking (like when I began dropping the F-bomb at our pre-paid driver after waiting 2 hours with the hope of picking up additional passengers at the border), she places a hand over her eyes and says a little prayer aloud.