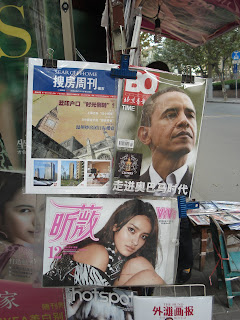 "So have you taken any interest in the U.S. election?", I asked Duguma, the owner of DH (Duguma Hunde) Geda, an Ethiopian industrial conglomerate. Mr. Hunde pulled a wallet-size photo of Barack Obama from his pocket. "I'll see you at the inauguration", he replied, and he was serious. Mr. Hunde, one of his Board members and I were on the bullet train to Shanghai together, and our low-key dinner conversation quickly grew into a caucus of international businessmen debating foreign relations and discussing how Obama could potentially help to resolve the issues underlying many of the current conflicts around the world. One perspective came from Affi, the Pakistani owner of an import/export business. His opinion is that the U.S. must negotiate with the Taliban and Al Qaeda. Another man suggested that a crucial step in putting to rest all conflicts in the Middle East is to forge an agreement between Israel and Palestine. I agree that nothing will get accomplished by continuing to pump resources into combating something that we cannot understand in an unfamiliar land, and while our temper still may be hot from the events of 9/11, my opinion is that we have got to start lowering our fists and opening our mouths. Former White House Press Secretary Scott Mclellan stated our current policy very clearly: "We do not negotiate with terrorists. We put them out of business." Well, what if we can't put them out of business? Do we continue to sacrifice the lives and good faith of our troops and our tax dollars because we are stubborn? As I spoke with Affi later, I opened CNN.com on the Blackberry to check the latest news. Six Pakistani civilians killed by a U.S. drone airstrike near the border of Afghanistan. Regardless of the circumstances, what do you think the United States would do if another nation killed 6 U.S. civilians on American soil? Affi and I looked at each other...I wasn't even sure if it was my place, but I felt the need to say "Sorry".

From what I have personally observed, people around the world: i) love Barack Obama; and ii) have incredibly lofty expectations for him. The feedback has been similar everywhere I've been, from the U.K. to Italy to Russia to Mongolia to China. Everyone wants peace and prosperity (the same thing I'm sure everyone has always wanted deep down), and many think that Obama will help to bring it. And while the Bush Doctrine seemed to have support following an attack on our country, the unilateral approach to foreign policy that it has directed may not be the best approach going forward. I'm not saying the U.S. shouldn't make any decisions regarding foreign policy on its own, but we do need to be more receptive to collaboration and negotiation. 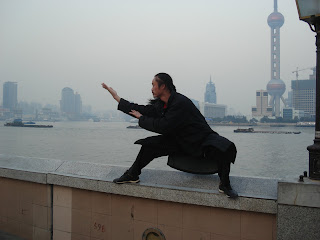 I've heard just about all I want to hear about the "financial crisis". Everyone on earth is talking about it, and I'm not sure whether any of us really knows what the hell we are talking about. Don't get me wrong, it's clear that the loose lending practices of mortgage lenders (including the creation of interest-only mortgages and the like), the lack of government regulation, the crooked packaging of subprime mortgages and the crooked ratings assigned to them are all contributors, but there are major underlying fundamental issues, and many complexities that are very difficult to weave together. In fact, neither Alan Greenspan nor most of Wall Street seems to understand; otherwise we wouldn't be bailing out the banks (my guess is that bank execs didn't choose this fate).

One Chinese fellow recently confronted me, saying the U.S. was to blame for China's current financial struggles. My response was simple: i) China is the third largest economy in the world, and can take responsibility for itself; and ii) the U.S. was the source of a great portion of the wealth that currently exists in China (not really a necessary or valid point, but I felt the need to throw it in). But China IS struggling, in fact. I recently read that over 65,000 factories have closed their doors over the past year as a result of i) shrinking worldwide demand for Chinese-made discretionary goods; ii) the rising value of the Yuan vs. the USD; and iii) higher raw material costs. And China has set aside approximately a $585 billion bailout package. 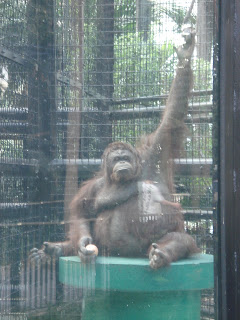 I realize I kind of left the Russian saga unfinished, so I'll get to that soon.

I saw this poor guy on the right at a Hong Kong zoo, and believe me, he wasn't swinging from any vines...

Anonymous said…
Brandon, I can't believe you are on this incredible journey! You have always had one adventure after another as you have grown up but you have turned into a wonderful young man!

Anonymous said…
Finally caught up with you. Saw some of those pics of the Big Chinese Wall on facebook. I've always wanted to go there. I am, in a word, envious. Cant wait to hear whats next. Keep your head up friend.
December 1, 2008 at 9:59 AM

Luke said…
Brandon, glad to hear things have been looking up since Russia. Definitely jealous of your trip, but don't know if I could handle it at the same time. In regards to Obama, I actually have been congratulated on multiple occassions. Keep representing the US, but keep your pants on. Later.
December 1, 2008 at 2:08 PM

Nate Riggs said…
Great post Brandon. Was turned onto your blog through your dad. What an amazing adventure you are on!

It seems that the WORLD has such high hopes for Obama. Lots riding on his shoulders. Should he not be able to deliver, so many hopes and dreams will be crushed.

On the flip side of that, I think the world needs a charismatic leader to boost the confidence of millions. Attitude is everything, and we've already certainly seen Mr. President-Elect begin to create change in that arena. This post is living proof of that. Thanks!
December 3, 2008 at 7:33 AM

Take on individuals not the world. Hopefully you have some of the most impoverished places on earth to visit yet. There with the hungry and disease ridden you will find more self discovery than you may want to, but will be thankful you did.
December 6, 2008 at 1:29 PM

How's life? We are now in Thailand after spending time in tibet and southern china. Where have you gotten to? Drop me an email and let me know where you are! We might not answer for a while... (internet is hard to come by on the islands). Would be nice to grab a beer somewhere if you catch up with us!

Uncle E said…
Brandon: Your Uncle Mark and I are slugging it out at 5/3 in Cincy.
You timed your move very well. The market has been brutal. It has been a blessing to get to know you on our trips to NYC and I am so happy your trip has gone well. You are a wonderful young man and I am sure that this trip will be a wonderful experience. We will keep you in our prayers. happy holidays and cheer for my nittany lions on new years day (just kidding)
hope to see you soon
uncle e
December 16, 2008 at 4:58 PM

Unknown said…
Unforuately Mr Duguma Hunde has died friday at mid night Jan. 10th 2009. It is sad even if he carried Obama's picture in his wallet and waited for Jan.20th to witness his dream come true.
January 13, 2009 at 3:56 PM