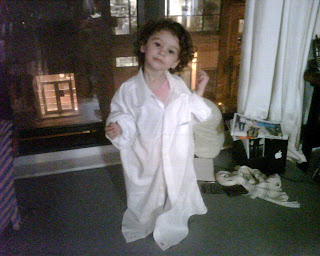 I have decided to post a bit more frequently, so here's an update (I can only post one picture from the BlackBerry, so here's one of my cousin Vivi in my work button-down):

I'm in Berlin this week via Milan, Paris, Rotterdam, Amsterdam and Munich. I stopped briefly in Milan, thinking I might be able to stop in on a few of the fashion week festivities (yeah right), then stopped in Paris for a few nights to get a hotel, get my back worked on and rejuvenate again before destroying my body for several days in Amsterdam and then Oktoberfest with my Cuz (Dan Adamson came over for the week from Boston - Dan and I realized we have the same great, great grandparents after becoming close friends in college) and Dan's friends who are living in Rotterdam.

From Munich, I headed to Berlin, where I've spent the week with a Russia language tutor, arranging a Russian visa, and preparing for my long trip on the Trans-Siberian railroad next week. The first leg of that trip will take me from Moscow to Mongolia. I started running again after rehabing a sprained ankle and getting over a bout of bronchitis that conveniently hit me a couple of days following the mountain climb. Bronchitis sucks, and I seem to be more susceptible to it after having pneumonia in college.

Well, it's starting to rain, so I'm going to find a cafe and stay dry. Peace.
Sent via BlackBerry by AT&T

Anonymous said…
Brandon, your dad sent me your blog link, so I've been following your adventures - and praying for you! Pretty amazing stuff.
October 9, 2008 at 11:36 AM