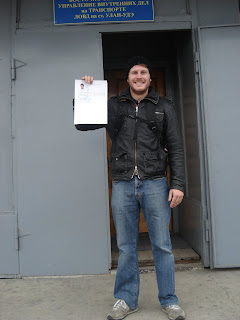 If you're just picking up on this story, scroll down and start with Part I...I just finished spending my third day with the Russian police in the Siberian city of Ulan Ude, just hours from the Mongolian border. The process of getting a single piece of paper that will allow me to travel to the nearest US Consulate in Vladivostok (2 days by train) has been painfully slow and bureaucratic, and I have recounted every single detail of my travels from Moscow to 11 different police officers through my incredible translator, Olga.

Most of my time today and yesterday was spent in an office at the police station answering questions like: "how much did your wallet cost", "how many zippers did your security belt have", "who were you sharing a cabin with and what country was he/she from" (I loved saying my roommate was a North Korean diplomat to Russia), "where, exactly, did you remove your security belt to pull out your train ticket before boarding", etc. I literally answered 100 of these detailed questions, many of them 5 or more times.

When I walked into the police station this morning, I practically knew everyone. So after a bit of handshaking, I proceeded to another office to finish answering questions (Olga was teaching today and was pulled out of class by the police for this). Finally, a 2 page report was produced, along with my "official document" which is a paragraph of Russian text with a stamp and my picture pasted on the top. The police then let me know that they had called Beijing (the train's final destination) and Moscow to have searches conducted. It was also mentioned that if it wasn't a Saturday night when I contacted them, they would have stopped the train while it was on Russian soil and had it searched. I told you they take this very seriously...

Finally, with document in hand, Olga snapped a quick picture of me (above) and generously offered to accompany me to the train station, where she helped book my ticket to Vladivostok. I have been in touch with the US Consulate - Vladivostok political officer, Stephen Kovacsics, who let me know that he could get me a one-year passport in just 2 hours. Hallelujah. Once I get a new Russian visa to cross the border, I'll be Mongolia-bound. 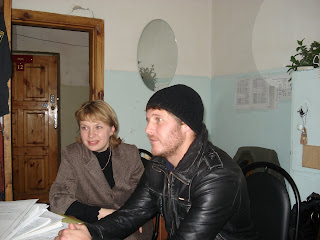 A goal of mine on this trip is to forget about time. After all, considering I have nowhere to be and nothing to do, why not spend a few days overcoming what had been a major fear as I departed from the USA -- a run-in with the Russian police / getting stuck here. Now both has happened and while it hasn't been a quick process, it has been quite pleasant. I realize the number of ways this situation could have turned out (I know it's far from over), but with time on my side and a focus on being straighforward and incredibly patient, I've come out of it better prepared for any similar situation in the future (knock on wood).

I've always been a believer that every country in the world can get along with excellent diplomacy. After speaking with my North Korean roommate and seeing/hearing about the differences in way of life and attitude in Russia and NK, I can definitely understand why it is currently not the case. In my opinion, however, it's worth whatever hardwork and patience has to be put in, because a peaceful world is worth it. It can happen. Maybe not in my lifetime, but during my few weeks in Russia, I hope I have planted a few seeds that will someday grow into big, beautiful trees. From Russia With Love...Again.

Daniel said…
good read and glad to hear you've maintained your perspective. Look forward to hearing more about your adventures
October 23, 2008 at 11:03 AM

Anonymous said…
It sounds like you have had quite an adventure in Siberia! I talked to your mom, Candy and Kate at Nadine's wedding and they filled me in on your travels and whereabouts. Quite amazing. When you make it to the Middle East, come visit me in Doha!
October 31, 2008 at 3:54 PM

Anonymous said…
Wow - I just caught up on all of this! Unbelievable. This is exactly what we talked about as your biggest fear right before I left you in Munich! Glad it all worked out for you.

Anonymous said…
Brandon, your adventures are fascinating! I suppose the DMV won't seem so bad after this.