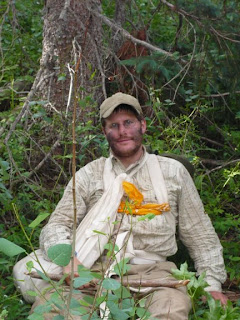 I like nature, but I'm not fully in touch with it. I'd like to be, but to be honest, I'm not really sure what that even means. Perhaps in touch with ourselves? Able to live right now, in this moment, with no worry of the future or past - enabling us to fully connect with our surroundings, whatever they may be?

After spending 14 days with no toilet, shower, electricity, matches, outside human contact or cologne (ha), I still don't fully understand it, but I can honestly say that I have a much deeper appreciation for it than I did prior. I can't tell you why, but I can describe parts of my experience. 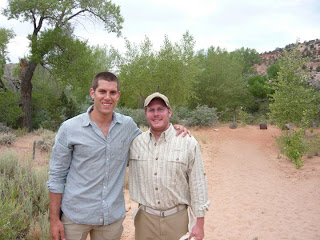 Seth Cohen (my friend and former Blackstone colleague who introduced me to the idea) and I arrived at camp on a Sunday afternoon, and realized that this experience would be unlike any other when approximately the following conversation occurred between another student and one of our leaders, Mojo:
Student: "So where did the name Mojo come from? Is it self given?"
Mojo: "I lived with the elves in the forest for 6 months and they gave it to me [with sincerity]."
Student: "Oh, so why did you leave the elves?"
Mojo: "They told me I needed to find my own clan."

While this conversation sounded incredibly odd at the time, upon looking back days later (during the 2 1/2 days I spent completely alone), it hit me. Just as Mojo left the forest, I'm leaving New York to "find my clan". I love New York, but the time just isn't right for me to settle in one spot with one type of job. I loved it, but it just wasn't right for me. Don't get me wrong...if I had to settle, I would and could.
Below are a few excerpts from journal entries, general commentary and pictures.
Day 1: "I still have no idea what to expect. I'm not really concerned about it. There's quite a 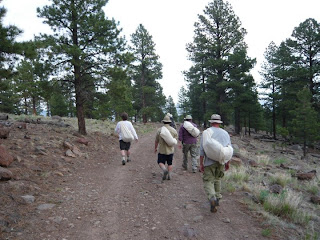 diverse group of people with diverse reasons for being here. We've come from all over...London, Switzerland, India, all over the U.S...occupations all across the board. Bharath, who is from Chennai, India, brought 17 batteries for his digital camera (cameras being the only electronic device allowed)."
On day 1 we began our hike in the evening and were soon hiking by moonlight. Little did I know, the quality of water at the first stop was likely the best we would see for 14 days - a small watershed headed for the desert floor. During the first phase we would carry only the clothes on our 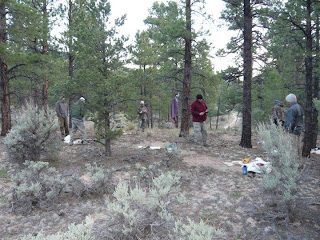 back, a knife, a water bottle, a camera and, in Bharath's case, 17 batteries. We hiked from the mountains to the desert floor that night, and upon reaching the desert, were instructed to make camp. Unfortunately, most of us had no idea how to make camp with no tents, blankets or food, so we layed ourselves upon the sand and slept, only to wake a couple of hours later shivering furiously. We spent the first 2 nights spooning and shivering (night temperatures of 40-45 degrees), and had no food for the first 2 1/2 days despite hiking about 30 miles. Actually, I shivered less the first night because every time I woke up, Seth and I would laugh hysterically that we were spooning. 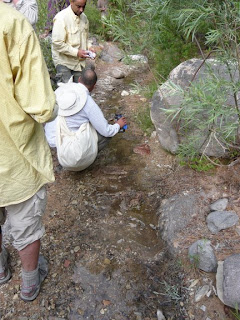 Day 2: "We filled our water bottles (except for me) in a slow-flowing creek at the low point in the canyon basin. There were cow pies in the water, which explains my preference to deprive myself rather than drink cow shit. I'm slightly anxious...perhaps it's because I have no idea what is ahead. Relax.....relax...."
Day 3: "I slept a bit better last night but still shivered throughout. It seems to be in the low 40s, and with no blankets or sleeping bags, Seth and I again retreated to "the exchange of radiant body heat". We must have hiked between 20 and 30 miles yesterday. We moved quickly, down canyon and up, and drank shit water over and over. After filling my canteen with water from a standing pool of scum surrounded by cow pies, I was elated to come across a swiftly-flowing stream when we finally stopped for the night. I haven't eaten in 38 hours now and am not really all that hungry despite. My strained calf [I had strained in during a 1.5 mile test run before setting out] feels better, but my back has been bothering me; I haven't carried anything on my back since the accident with the deer and being hit by a car recently didn't help it. We've learned few survival skills - likely so we suffer during this phase. Some speculate we will eat today; others think we'll go one more.
I began yesterday frustrated that this wouldn't be a challenge for me. I ended the day wondering if I might be the weakest link." 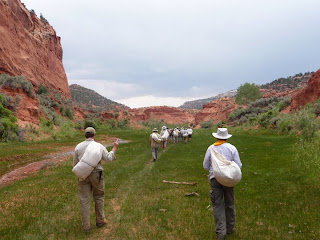 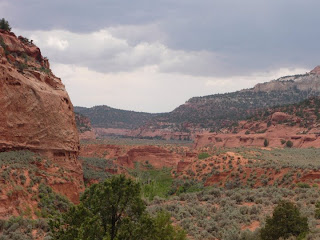 Day 4: "Yesterday was the most difficult day, physically, of my life. With 5+ miles to go, I felt I would collapse. I counted each breath, 1 to 20, then started over again to keep my mind off of Mom's chocolate chip cookie dough [the Ponderosa Pine tree smells of vanilla] and a Donatos pizza. I was light-headed and with each step wondered if I could go on. We will eat today for the first time. We will slit the throat of a sheep and prepare it for rations for the next two days."
Day 5: "My entire body and clothes wreak of dead animal. The kind of smell one winces at while driving past roadkill on the highway. I won't be showering for 9 more days. I wasn't sure how I'd 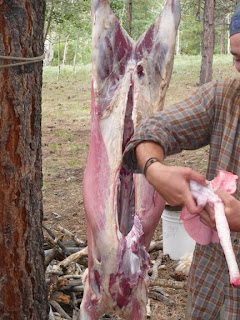 react to the sheep killing, but I think I handled it OK.
We approached the 2 to 3 year-old sheep while Mojo lay with in on the ground, securing it, and lightly massaging its brow and speaking softly to it as we approached. I've never seen an animal so calm. I'm convinced that Mojo had helped the animal prepare for its fate. All 11 of us placed a hand on the thick wool, some to secure it, some to comfort the sheep; others to simply attempt to connect to the animal we would eat. Bharath drew a straw giving him responsbility for cutting the animals throat, and with Shawn's [leader] assistance he did so, releasing a cascade of blood from the arteries in a bucket placed in a hole dug previously. After kicking for a few minutes and gasping from its severed windpipe, the sheep's eyes glazed over and it lay motionless as flies swarmed the fresh cut, searching for a place to lay their eggs. 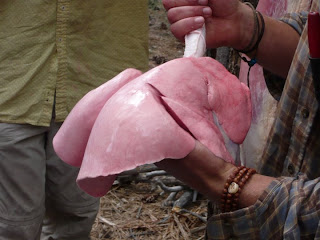 We hanged the sheep on a branch from its hind quarters and proceeded to remove its skin by making a couple of specific cuts with sharp rocks.
After skinning the sheep, we cut down the 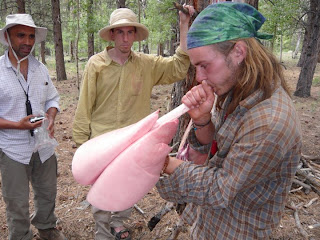 center of the belly and removed its organs. Mojo placed his lips to the trachea, inhaled deeply, and filled the animals lungs to capacity. It was the freakiest thing I've ever seen. It soon began to rain / hail with intermittent thunder and lightning, so we retreated under a poncho where I laid with Chad and Mojo removing the meat from the bones with a 5-inch blade. I was there over an hour removing the ribs, backstraps, front and hind quarters..." 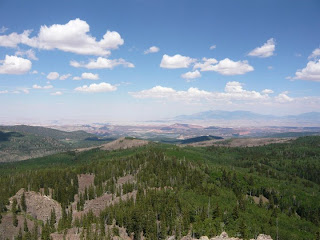 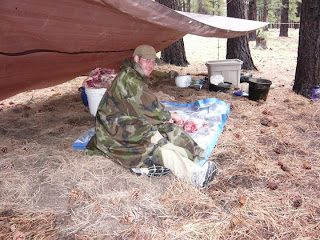 vacanti said…
Wow, man. You had me captivated the entire time. Kept thinking how I would have handled myself, or, better yet, how I wouldn't have been able to handle myself.
October 15, 2008 at 7:50 PM