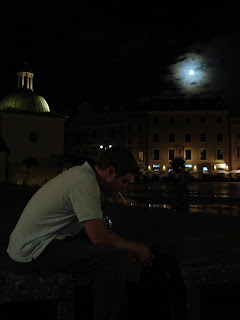 Krakow, Poland is a major tourist destination filled with university students, beautiful historical structures and commerce. Despite the thriving tourism industry and general economy, remnants of Nazi-rule still exist in the city, which, during WWII, saw its Jewish population disappear from 60,000 to virtually 0 (nearly all its Jewish citizens, after being consolidated into a ghetto, were sent to Auschwitz). Funny thing is, Jews were originally invited to Krakow to escape persecution in Spain and Portugal by the Polish King Casimir III around 1360.

First off, let me just say something about organized city tours (in general). In the past, I wouldn't have been caught DEAD on one of these picture-snapping excursions that I've frequently witnessed from outside my apartment in Manhattan. If I have to watch one more German (sorry Timm) take a picture of a squirrel at Madison Square Park...truth is, after taking a few of my own (I highly recommend walking or biking tours with a live commentator). Had it not been for Amish's suggestion that we take a bike tour of Krakow, I would have never had the opportunity to get a first-hand look at some of the most interesting parts of the city that most tourists don't get to see. I felt like I was a kid in Lord of the Flies, cruising the city in the pouring rain with a posse of bikers in ponchos. 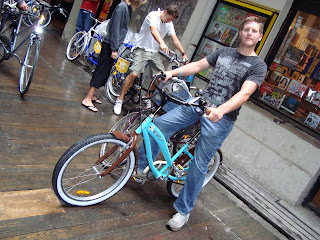 Perhaps the most interesting part of the tour (aside from visiting many of the 14th-15th century buildings of significance and the factory of Oskar Schindler), was learning about the fierce rivalry among the teams of the Polish soccer league. Often connected to this rivalry are the skinheads (neo-Nazis), who appear to use soccer as an opportunity to vent... See the following video (its 5 parts, in total) if interested. Our bike-tour guide, John, was consulted and featured during a portion of it for his connections with the local gangs and his knowledge of the area: http://www.youtube.com/watch?v=zuytQvvv2qw&feature=related.

Upon first hearing about the madness of the Polish hooligans, I scoffed, thinking of the rowdy 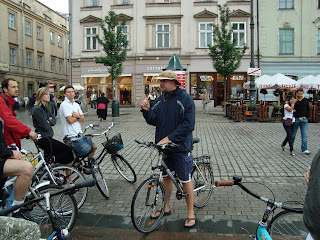 Manchester United fans, the Ohio State / Michigan rivalry, or my days as an SC hooligan during high school soccer matches (ha). But as you'll see in the video, the hooligans of Polish league soccer are like nothing I've ever seen or heard of. The fans have the most intense hatred for their rivals, which results in routine violence at games, organized brawls and occasionally murders. The most intense of these rivalries is between the two teams located in Krakow (Wisla and Cracovia), whose supporters geographically split the city and have expressed their support by covering parts of the city in graffiti. I'd encourage you to check out the video above for a taste. I'm now in Scotland, and will try to catch up with the blogs soon. Thanks for the comments and for following along. 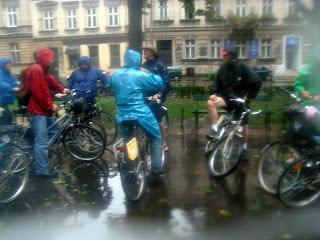 l i t t l e said…
hey there....love that first photo of you in the moonlight - very cool shot.  sounds like you're having a good time and learning a whole lot at the same time.  i enjoy you're writing so i hope you get to write more soon.

Mark Albee said…
Hey thanks for the update! You know all of us here working at our cubes have to be able to live this thru you!Just out of curiosity when does the roughing it part of the trip kick in? Just kidding!
August 26, 2008 at 8:38 AM

Anonymous said…
Brandon, Found out you have a blog of your travels from your dad's. He'd be proud of your cycling around Krakow, in the rain no less. Sounds like you are getting some interesting experiences, but that is par for the course with you. Stay safe and don't do anything too crazy, wait this is the guy who shaved his head in a parking lot with scissors after the razor died waiting for our van to be towed so we could make it to work camp, what am I saying?

I'll keep reading what you are up to.

This is John from Krakow Bike Tours here. I found your blog while searching for other stuff regarding the tour on the net. Thanks for the nice words about the tour & we are glad you enjoyed it. You can check our blog at http://krakowbiketour.blogspot.com/ and scroll down to August 16th - I think that was your tour. I'm writing to ask about the possibility of linking to this page of your blog for a new website that we are setting up in the 'What They Say About Us Section'. Please drop me a line at krakowbiketour@gmail.com - Thanks again & I hope you get this - John,Krakow Bike Tours
March 30, 2009 at 12:24 PM