May 22, 2017
Snip snip snip snip snip snip snip....I counted roughly two snips per second consistently for at least 25 minutes. Mr. Thakur carved the hair on my head with precision. The cut itself was by-the-book...there was no stylistic creativity. He simply gave me a nearly flawless traditional men's haircut. The experience he provided, however, was art. Not the kind you hang on the wall and rarely, if ever, take the time to truly appreciate. But the type of art that comes and goes once. The kind that slips away if we don't allow ourselves to fully experience it. That type of art which can fundamentally change our perspective forever if we are present to witness it. 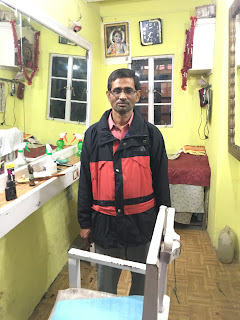 Sachita Nand Thakur, originally from Darjeeling, India, has a one-man barber shop on a small paved residential alley toward the top of a Himalayan foothill. I'd seen his shop door open, the light on, but the shop had been empty every time I walked by on the way to my local home stay.

One evening, I saw him sweeping up hair as I passed. "Hello sir, do you have time for a shave?", I asked. He tilted his head and nodded with a slight, genuine smile and soft eyes.

Sachita lathered up my face, inserted a fresh blade into his straight razor, smeared a dime-size blob of shaving paste on my face, wet the lathering brush, then spent a few minutes lathering until the paste was a thick cream.

He swiftly and definitively moved my head into position - just short of a jerk, and just as he brought the razor to my face, the power went out - a twice or thrice daily occurrence in Darjeeling. The daylight was dim in the alley, but he proceeded, giving me one of the most complete, smooth shaves I've had to-date. Not even the slightest nick or hair protruding above the skin, below the nostrils included. He shaved me twice, slapped my cheeks and neck with an antiseptic and a bit of aftershave, and I paid his standard straight-razor shave rate - 30 rupees, or 47 cents USD. I wondered how many customers he averages each day. 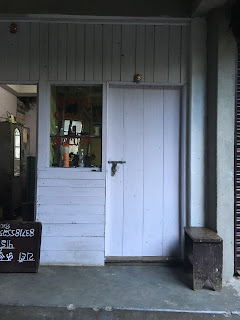 As the hair on my head continued to grow, I began keeping my eye out for him again. I ran into him five times when he was unavailable, then around 7pm on a Saturday night, sat myself on the stoop outside his shop and waited. Five minutes later, he appeared, walking swiftly downhill toward me. He waved and walked right by me. Haha. He didn't turn me away, so I waited and he returned less than five additional minutes later.

This time, he first cut my hair - all scissors and a razor blade, which he used to to shave my neck and behind my ears. He must have snipped close to 2,500 times over 25-30 minutes, trimming off what looked like mere millimeters at a time. Many people stopped briefly to chat with him from outside the shop door. He seemed very humble and unassuming, and it was nice watching his kind temperament as he briefly visited during periodic mid-air snips meant to clear loose hair from the scissor blades. His nephew stopped in to take his dinner order, and a few kids and teenagers even stopped to say "hello" - it didn't surprise me given his soft and kind demeanor.

Next, he lathered me up for another full shave - just as close as the first - slapped me a few times once again and finished with a shoulder, neck and arm massage.

Mr. Thakur - a humble, talented, Darjeeling barber. He works hard and thoroughly, supports his neighborhood socially, professionally and economically, and graciously connects with others. He has cut hair for 28 years and doesn't seem to have aspirations to move on. He averages 30 cuts a week, which would yield him around $1,500 annually. I didn't ask him what his goals are, but I have a suspicion he would have looked at me funny.