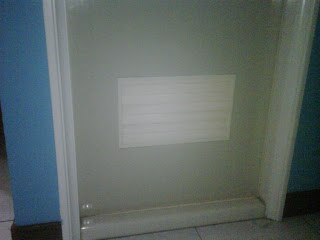 From the new Blackberry phone ring the words of Lieber and Stoller sung by Sam Cooke, summoning feelings of nostalgia as I try to shake the jet-lag which has held unconsciousness captive since I re-crossed the Pacific 3 days ago. I'm lying on the floor of my cousin Laura's and friend Jamie's apartment in the southern coastal city of Kaohsiung, Taiwan's second largest and warmest. Despite the relatively warm weather year-round, most Kaohsiung apartments are chilly in the winter months as central heating is uncommon.

I periodically open up a game of Texas Hold 'Em on the handheld and nearly mindlessly cycle through a few flops, nervously hoping to pick up a 3-of-a-kind or even a 2-pair to confidently yet inconspicuously swell the pot around the turn and into the river. There's no real money involved, but it seems like a fairly healthy way to feed this sleep-deprived anxious state. Hold 'Em originally captured my interest after naively inching toward an $11,000 pot at a "very amateur" yet professionally monitored tournament in Vail 2 years ago.

It's 5am...only 3 hours until the local kids begin ripping leisurely screams from the apartment complex courtyard (the tile covering the ground surface below doesn't help) and the drilling begins in the apartment above. Even if I could sleep, I'd still be running for the toilet every 30 minutes - I accidentally downed a few big gulps of the local water as I showered this morning. I attribute my lack of awareness to being tired, and therefore I wonder if I won't mindlessly take another few gulps tomorrow, which will keep me awake tomorrow night and so on...I might just have the shits every day for the rest of my life, I think to myself.

I began today eating breakfast with Laura at a cafe on the street. I had barely begun an article on Berry Gordy and the genesis of Motown Records in the Taipei Times when the first round hit. Grabbing Laura's keys, I swiftly shuffled up to the 10th floor apartment, unbuckling my pants along the way. I awkwardly squeezed through the slowly opening doors of the elevator, fumbled the keys into the front door and swung it open, then made a beeline for the bathroom...YES! I was going to make it! And then I saw it...That inch-wide, glowing strip of light peeking out from under the closed bathroom door - the residential equivalent of the universal "Lavatory Occupied" sign on airplanes. Jamie was in the shower. I panicked and briefly teleported myself, Star Trek style, back to survival school. I quickly scanned the kitchen area. I needed a location, a receptacle and some TP, and fast...So 90 seconds later I found myself in the apartment building stairwell with a small trash can and the piece of tissue paper that had been wrapped around some incense I had received for Christmas. Whew. I laughed out loud as I walked back into the apartment, proud of my resourcefulness, unaware that this was to be the first of many sprinting contests today between my legs and digestive system.

Laura and Jamie work from 2pm to 9pm every day, teaching at "cram" schools where Taiwanese children and adults supplement their already busy schedules with daily English lessons. Over the past couple of days, I have spent some of that time hanging out with their friend Shi Yi Jiung ("Tippi"), who has now become a good friend of mine as well.

I jumped up from my seat on the couch...."I should get back Tippi see you tomorrow (spoken with no pause for punctuation)". But I already knew...there was no way I would make it out the front door let alone down the street and around the corner to Laura's apartment. So I ran down the hall to the bathroom, shut the door, flexed every muscle in my body (including all of my face muscles, oddly), and breathed deeply. Damnit damnit damnit damnit damnit. I knew immediately my fate. I quickly crafted a battle plan. Open the window; keep it quiet; ask Tippi a question or two to insinuate that I'm simply powdering my face perhaps. But as I began to prepare myself and realized there was no TP in sight, I was forced to humbly run back down the hall to feverishly ask for toilet paper. My original plan was foiled. By the time I made it back to the loo, the Three Gorges Dam had begun to crack. I sat. And for 10+ minutes, behind a paper-thin bathroom door that didn't fully close, in a perfectly silent apartment, I single-handedly represented the trombone section in a Berliner Philharmonic performance of the last movement of Beethoven's 5th symphony. Except louder...I then cycled through a peculiar set of emotions: For a split second I was mortified, then I began to laugh uncontrollably. Then I realized that I had likely just provided Tippi with the most embarrassing experience of HER life, and I began to feel sorry. Then I laughed again. Finally, I suddenly became incredibly calm, and I didn't feel the least bit embarrassed.

I finished, stood, washed up, and walked casually down the hall. "Wow...Sorry Tippi, I've been having some problems today", I declared. "Let me get you some medicine", she replied, and after I washed down a packet of soluble powder, we looked at each other, smiled, and returned to the living room. That's it???, I thought. Then I realized that what could have been among the most embarrassing moments of my life wasn't awkward because I didn't MAKE it awkward.

Since writing this I flew to Bali, Indonesia, and will soon work my way up through SE Asia, across to India, and then to Africa. Guess this "race" between my legs and stomach will be more of a marathon.

Sent via BlackBerry by AT&T

Meryl said…
Dear Brandon,
I couldn't help being pleased at the reference to Leiber & Stoller and I'm glad they are keeping you company! That being said, I am so sorry you have been having such a miserable time with your digestive system. I hope by the time you see this things will have retured to normal and the trouble will all be in the past.
I was so very happy to see you on your home visit and I look forward to all your postings to come.
Much love, Meryl
January 18, 2009 at 12:32 PM

Luke said…
Hopefully you've gotten rid of the cha-chas by now. Know that you seriously had me bent over laughing at the thought of the symphony. Stay safe.
January 19, 2009 at 12:42 PM

Andrew_Mehlhorn said…
Bravo Brandon. That was one of the most eloquent well constructed stories about having the shits that i've ever read. The gift of the gab has done you well. I trust you will enjoy the climate and yourself and perhaps others, ha, in donesia. i highly recommend thailand, my bro says cambodia and vietnam are all well worth a gander as well. Make the most of everything.

A haiku (i know youre not in japan but...)
Beware Asian Farts
They May Not Be What They Seem
Bring TP Always

Anonymous said…
I didn't noticed that so many things happened in a little bathroom...and I don't feel awkward at all :)
I had a great time staying with you.
Enjoy your travel.
Tipster
January 20, 2009 at 8:39 AM