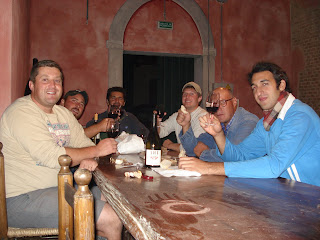 In the last post, I discussed my strategy as I began my work here at Tenuta Mazzolino: smile (but not too much), work hard (but not too hard), etc. In making a recommendation to others in similar situations, I'd say the following: "just be yourself". At work, at home, with friends...everywhere. If you smile a lot, then smile. If you work overly hard, work your butt off. If you're lazy, well, you're out of luck, because I can't think of a job that embraces laziness, but you get my point. You see, what I described is my way and it's not the way for everyone. I do believe that workplace dynamics can be complicated, but if you stick to your guns, you will be respected, even if your colleagues disagree with you. So be YOU ("self-aware" as my old boss Scott Simon would put it). You won't always be right, but you will have your gut behind you.

Tonight we had a pizza, 3-year aged parmesean (incredible), salami and wine (plus some liquor made with sweet Moscato grapes and some booze a Romanian friend gave me in Barcelona). As the end of the night neared, Giovanni, an Albanian man in his 40s who speaks no English, asked how old I am (JF translates when we speak to each other). I responded that I am 27. He told me that he is surprised because I am very "intelligente". I was flattered, but understandably puzzled. How could he make such a judgment without understanding anything that I say? Then it hit me...Giovanni thinks that I am smart because I don't say anything at all.

But Giovanni and I do say a lot to each other. We speak with our hands, our energy and our eyes. And as I sat at that table, knowing that I won't be able to verbally speak with most of the people I will encounter over the next year, I realized that it really doesn't matter.

Anonymous said…
I agree, those languages can take you farther than the verbal ones ever will. Not only have they helped to communicate with people who speak another language, they've also helped to bring me closer to those I've known and been speaking with all my life.
December 1, 2008 at 8:33 AM

z3qiykntvo said…
It’s a recreation of pure probability and really straightforward to play where the odds are 50/50. With every new PowerUP bonus spherical performed, the prize pool out there in the next spin will double, with the utmost prize in the fifth spherical ranging between 2600x and 8000x. The best recommendation we may give right here is don’t simply 1xbet korean go falling for the massive numbers in flashy advertisements.
December 28, 2022 at 12:07 PM